How an accidental failure led to a life-changing idea

WHEN a bartender decided to raise $12,000 for people he didn’t even know, he couldn’t have imagined what he was getting himself into.

NICK Abraham was working at a bar in Darwin when Nepal was struck with a 7.8 magnitude earthquake on April 25, 2015.

Not realising what had just happened he casually walked into the dishwashing room to find the workers, all Nepalese men, sobbing out the back.

They were well aware of what had just happened — and none of them could get through to their families. The staggering toll of those affected by the Nepal earthquake would later come to light with almost 9000 dead, another 22,000 injured and millions more displaced.

The aftershocks would go on to trigger avalanches and landslides and knock down people that had made it through the first unscathed. It was from that moment that a then 21-year-old Nick knew he had to do something for his friends — so he started researching charities. But as a lot of charities unfortunately do these days, they were charging at least $3000 to go and volunteer for a few weeks.

Eventually, Nick stumbled upon a charity that was looking for people to build 200 temporary shelters in a tiny village 30kms north of Kathmandu — one so small it didn’t even get a mention on Google Maps.

By September, 2015 Nick had raised $12,000 to build shelters in the village of Ghumarchowk, so he jumped on a plane and flew to Nepal, ready to change the world. Arriving in September, 2015 Nick was met at the airport by a member of the charity who apologised and said there had been issues with the organisation and people had stopped working — meaning there wasn’t anything for Nick to do.

“It’s not the Nepalese way to tell people if they have a mishap, they never want to disappoint anyone. I wasn’t sour at them,” he said.

He asked to be taken to the village leader who told him they didn’t need temporary shelters — but they did need two schools built, and Nick just happened to be a trained carpenter.

“I’d given up carpentry because I felt like I wasn’t doing anything important in my life,” he said.

But Nick, as a tribute to his grandfather who was terminally ill with asbestos cancer, decided to take on the monumental task.

“He was on his last legs the first week I got there, I left him pretty much on his deathbed,” he said.

Nick was determined to finish digging a huge hole for where the school would go, as a way of showing his grandfather some sort of progress.

“I just wanted to show him something so he felt like he was there. I hadn’t finished the hole when he died but it was such a hard place to live in. No electricity, no water, mentally it was such a challenge but when he passed away I was very motivated to keep going and follow through,” he said. It wasn’t until Nick met a Nepalese man by the name of Damphu that he realised he didn’t want to follow the traditional charity way anymore. “I was doing the whole charity structure which was fine but I noticed when I was there, it was creating a sense of dependency because it was all free for them. Like giving candy to a kid,” he said.

When Damphu said he was on the verge of selling his farm land to raise $US3000 to send each of his daughters to college, Nick saw an opportunity to create something from the ground up — which served as the perfect name for the organisation. He and three other friends, who were all 21 at the time, started implementing a social enterprise where Nepalese people work for the organisation on double the minimum wage of $US2 a day.

People living in poverty are classed as earning less than $US2 per day, which they previously were.

The workers now earn close to $US8 per day which, while it may not sound like a lot, a Nepalese family is generally able to feed their family and have leftovers for the next day on less than $US1.

“I saw Damphu as just another father who was doing absolutely anything for his family just to make ends meet, for survival,” Nick said. 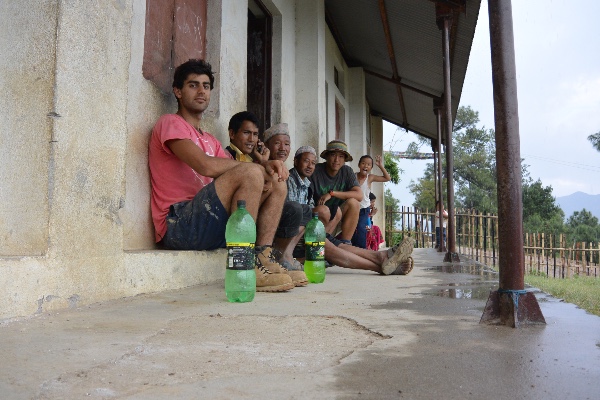 SETBACKS AND HEARTBREAKS Nick’s two years in Nepal, while overall have been a success, doesn’t mean he didn’t struggle.

The first school, which Nick estimated was supposed to be a three month build ended up taking six months and the full $12,000.

After India announced a blockade against Nepal, the prices of everything skyrocketed and work came to a standstill. There was no petrol for the trucks to cart materials up the hills or anything to help them.

Speaking to his team of volunteers, Nick told them they could stop.

“I don’t expect you to have to do this, but I’m going to stay,” he told them — but they all did, carting 50kg bags of cement and 37kg rolls of barbed wire up the hill that took two hours to walk. And even when the blockade wasn’t on, the village is only accessible by bikes or big, heavy duty trucks when it isn’t monsoon season. A “particularly s**t day” was Nick’s first Christmas in Nepal when he and a friend hiked up to a neighbouring town high in the mountains to find the villagers had frozen to death. “I was so pissed off because there’s people sitting in these nice big concrete buildings in Kathmandu and we’re 21kms northeast of Kathmandu and people are freezing to death. It’s crazy,” he said.

“They’d tied their T-shirts and any clothes they’d had for walls. The floors are made of mud, the roofs were tin and they used to stack stones on the roof but if there was another earthquake it’d fall down and kill them so they either stacked stones up and risk dying of an earthquake or they put clothes to make a wall and freeze to death in the winter,” he added.

THE IMPACT Over two years since he first arrived in Nepal, Nick has been well and truly embraced by the village and regularly returns.

“We’ve built two schools, a hospital and I think we’ve raised enough money for a sanitation system as well,” he said.

From The Ground Up now employs 16 Nepalese and are taking on another eight this week when Nick visits. “Nothing can be for free — people have to be invested. They have to get up and do it themselves,” he said.

Whether they put their time, labour or materials into the projects, Nick has taught the village to be self-sustainable and how to earn $US200 a month when they were used to earn $US30-$60 a month. Damphu, whose first attempt at building with Nick was to pick up a cordless drill to try and hammer in a screw, now runs four construction sites, manages all of their employees and does the finances.

“Things are improving in the village — slowly, but it’s happening,” Nick said. “We want to hop from village to village and do the same thing.” The organisation, which also includes Joseph Wehbe, Paddy Hayes and Scott McKeon, might barely be a year old but they’re well on their way to changing the world. You can donate to From The Ground Up here. Article: Natalie Wolfe (News.com.au)

Supporting From the Ground Up